A downloadable Expedition for Windows

The game : Expedition is a game where you play as Edward Coleman, a journalist in search of fame. On the trail of an expedition that turned to a complete disaster, he will discover a facet of reality that he would have wished to never know.

The game was created during a 6 weeks work project included in a training given at "Technocité Mons" in Belgium.

This prototype carries the main intention of a possible long-term production: a survival-horror with narrative intentions inspired by the work of H.P Lovecraft: At the Mountains of Madness.

I cannot go to the ending.

I don't understand how you guys who build this game were testing it with such a horrible movement system. Do not know about other players but I had 60 stable fps.

After a first meeting place :
I couldn't normally hide with a first attempt in a barrel because the movement is horrible (I was playing via keyboard arrows).
So, I ran back, jumped down and this asshole did not have access to me.
The monster cannot jump down and kill a player, it just will run forever on the same spot.
The game incredibly needs normal movement system. I'd prefer to add control settings. 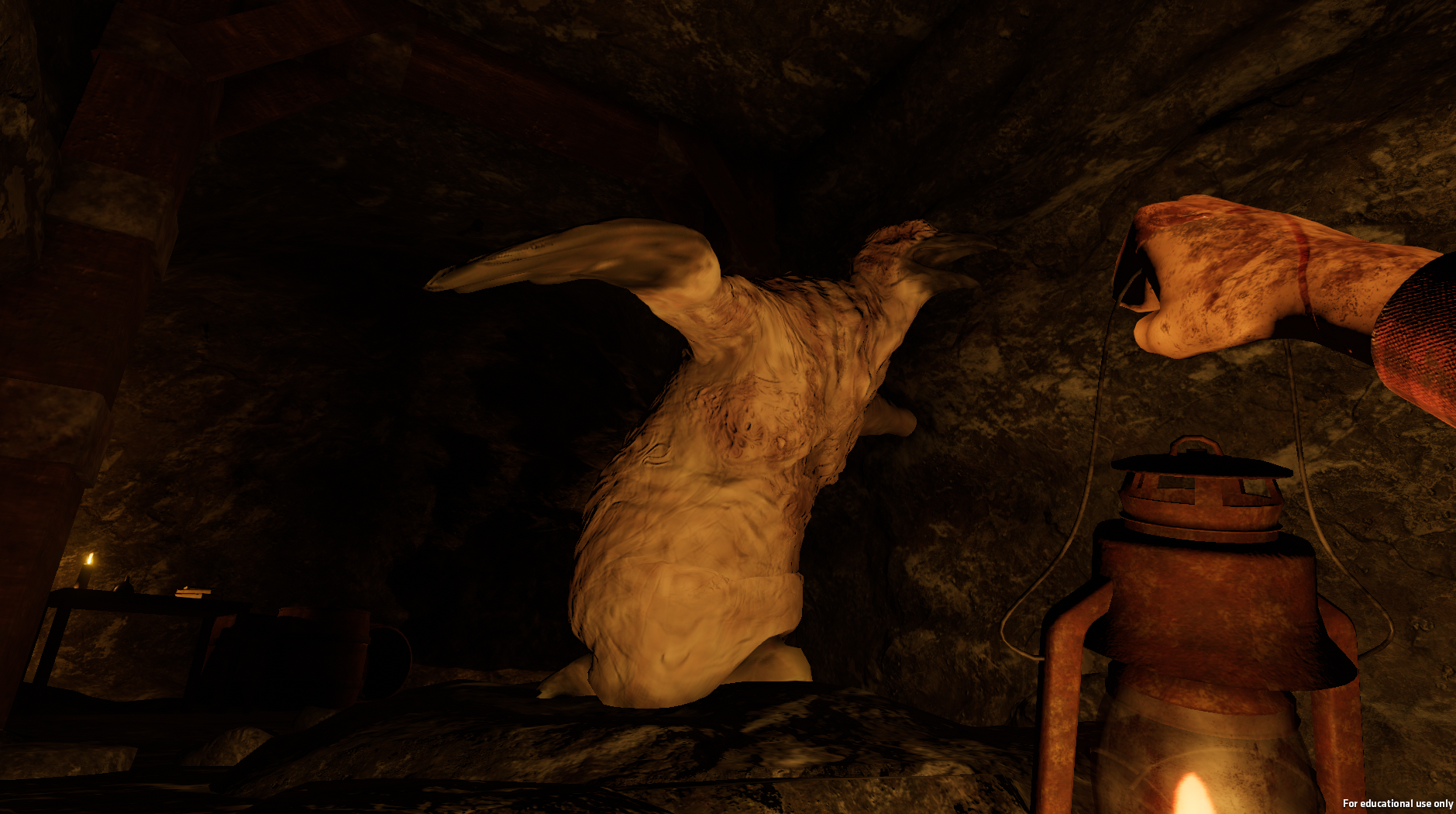 The game does not have any controls settings, a player cannot normally control character because the W & A buttons do not work.  A player is able to control the character only by keyboard arrows and this is sad. Please fix this problem.

What are the minimum system requirements?

Interesting game.  I was not expecting that enemy and they jump-scared the crap out of me. Lol.  The game looks good.   The only thing I'd like to see are some checkpoints.. but maybe there are and I didn't get far enough?  Who knows.  Anyways, I recorded my game play if you'd like to check it out.  Keep up the good work!

Hello, I have played little of this game (I only saw the monster running at the beginning) because the fps that I have in the game are low and it does not let me play well but the game is magnificent it has a good return, the darkness, light, what horror everything is more than good makes me remember The Forest. I have a question when will another update come out or will the full game come out and if it will have to change the graphics with advanced?

hats off to the game developer

this is one of the best game ive ever played in a really long time!

The alternate controls got me at first.. I wish this concept was expanded upon! The game felt like a remix on Amnesia with Old Gods lol

For me WASD controls didn't fully work, only S and D did any movement and that made the game very annoying to play and thus I didn't finish it. Since crouch is C and sprint is Left Shift I feel like this is something that should have been noticed and fixed.

It got me too, but I didn't fret over it, you just needed to install the "qwerty" version instead of the "azerty" one. That fixes the control set up.

I can't believe I didn't notice that, thanks man.

(DON'T READ THE SPOILERS BELOW-DEVS ONLY UNLESS YOU PLAYED ALREADY)

My heart is hating me so much that it slapped me the first time when that uber penguin monster ran at me. Now look, I cheated by watching someone else play to see if I would like it enough to play it through. Long story short, and after running through the maze like a half breathing half-wanting-to-stinking-live-explorer and finding out that I was going to end up getting eaten by something I couldn't see, I would definitely play it again at night like I did this time. I seen that first interaction with the uber penguin monster. I jumped when that thing screamed as it tried coming for me. (I mentioned this in the next paragraph with a little more depth) Just watching the penguin cannibalism makes me want to not sleep; this is because the last time I binged played scary games at night, I literally dreamed like I was in a scary game while controlling my movement with a keyboard. (a little sidetracked there but I'm back). Just so you know, I loved playing this game, there was a quirk or two, but overall it was great!

The holding your breath when you are near the uber penguins was genius! I loved that you can hold your breath to get around those things. The maze was not too hard for average players to figure out nor too easy. The difficulty was set right in my opinion. At first glance I expected twists and turns that would have me wandering around like a moron only to find out it was simple yet challenging with my uber friends with me.  I will have to admit, when I was walking through the throng of penguins, it wasn't as scary anymore.  My reaction was more like "hey guys how's it going?" Maybe it would bring in the fear factor to have one of the penguins just force their face in front of you screaming, but if the player was still breathing, they'd be okay.

The ending wasn't as scary either as much as it was expected. Falling almost to my death and surviving was a clear sign that I would most likely be killed in the next scene. The sound effects and atmosphere was incredible! This makes me want to go caving so bad! Even if there are uber penguins trying to kill me! lol

Overall, you guys did a fantastic job creating this game. I hope you make more in the future under the horror tag. Please forgive me for the  lengthy review; I just don't do video or audio recording. I do have one suggestion for the next horror game, please put in some weapons for us to use with little ammo to use for the purposes of trying to survive a horror styled game. I wish the best for all of you.

First of all, thank you for your review, it was a pleasure reading you. Seeing what each person who has played the game thinks individually is a real wealth in terms of learning and I have taken into account each of your arguments.

Our intentions during the production of this game were indeed to propose an experience based on tension and atmosphere. It is a pride for all of us to see that the game works and that the developed mechanics serve correctly these intentions.

Regarding penguins, we would have liked to go further in the iterations, but as quoted in the description, it was a six-week exercise, and we did it according to those rules.

We have learned a lot during the production of "Expedition" and it is above all a product bearing intention about what we want to bring to the video game industry.

Thank you again for taking the time to write us this review and the interest you give in our work.
I hope to be able to reread you in future publications.

Made a video aswell :)

Really Enjoyed it despite some small flaws!

i hope you get the money, id donate if i could

It was such a cool experience! The atmosphere, graphics, sounds and monsters were awesome! Here's my little playthrough (in Polish language) Cheers!

Really great game. From the creepy atmosphere to the terrifying creatures, it was all done really well.

Thx, we tried as much as possible to work on the atmosphere and atmosphere of the game, happy that it works.

Thanks for making this, really enjoying it! :)

Thx dude, i was in charge of the sound for the games, glad my work is appreciated.

Thanks you the game) waiting continue

Thx for the video !

Got me scared haha. I love the inspiration from HP lovecraft.

I'm a huge fan of H.P Lovecraft, thx for the video dude :D

Was fun to play.

Honestly one of the scariest games I've ever played to date.

Game so far is good!  I liked the atmosphere location and story for the game too!

I never thought the cutest enemy in any horror game I've every played would scare me SO BAD! I love it! Looking forward to seeing more from you!

Thanks for putting us on your top :D Nice video.

This was really good! Perfectly crafted atmosphere, the map is very well made, and the creatures made me genuinely scream in fear. I really liked this! Here's my playthrough:

Awesome game! We included it in our latest video if you're interested to see!

Loved ever second of this - would love to see what else you've got in the works! (sorry about my earlier stupidity)

Thx for the gameplay dude, It’s always a pleasure to see the game works and see people enjoy playing it. 😁

You got any more games in the works or released to play?

This game was really good i liked how you had to hold your breath the atmosphere was great i was always on edge. i didn't realise you could hide in the boxed while playing but i actually got scared by this game and it has been a while since i got spooked like that i really enjoyed this i cant wait to see what you make next also i don't know if the keyboard thing was me or the game.

Hello, thank you for your feedback. It’s a pleasure to see that the game generates interest and that people enjoy playing it. Great video by the way.

Reply
CallMeKota96 days ago(+1)
Played the game, and my god, it is incredible!
Reply
Rostiger Rentner97 days ago

hi, big thx for the great game. greetings from rosti

This game, from the screenshots posted on the right on this game page, remind me of the Amnesia games.

Amnesia was one of our references :D

Never played it. Sorry, please direct message me over on my Twitter if you're wanting to talk. Just look at my profile on here for the link.

I really hope to see more from the development team.  A follow up to this game could be epic, say some 50 years later?

Just my thoughts.  I ended up getting some intense and hilarious scare on camera and I really hope you enjoy the footage.

I'm a huge fan of Lovecraft, especially At the Mountains of Madness. Your game is awesome so far! 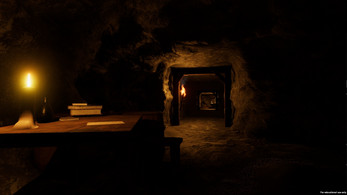 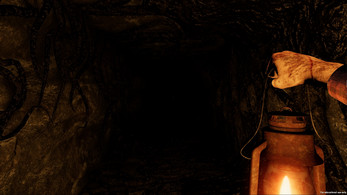 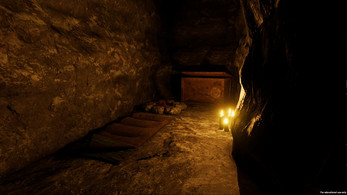 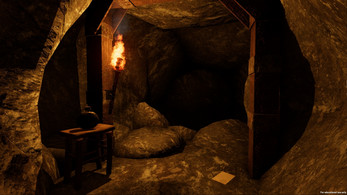 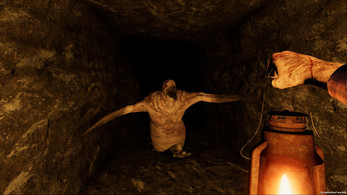 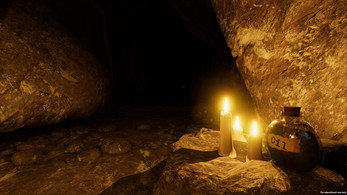